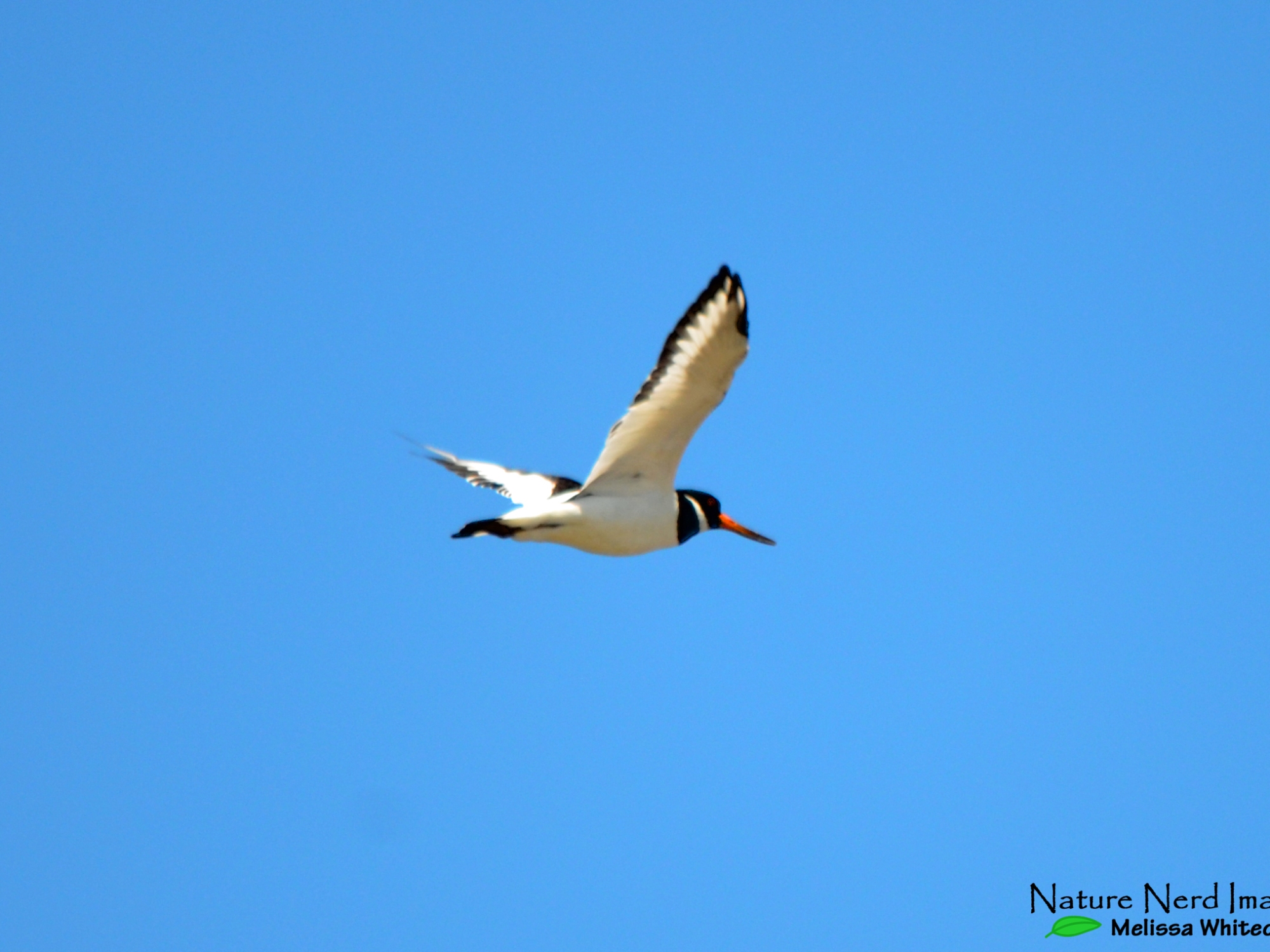 Today was all about the waders and shorebirds. Walvis Bay Saltworks is famous for its incredible collection of shorebirds, particularly its rare shorebirds. Namibia produces a huge amount of salt using massive evaporation pans. The largest of these complexes is at Walvis Bay which produces 90% of South Africa’s table salt. It is over 3500 hectares of ponds at various stages of evaporation and each type of pond holds different shorebirds. Combined with the lagoon in the harbor, Walvis Bay holds between 39,000 and 79,000 wetland birds according to RAMSAR including one of the largest flamingo populations in southern Africa.

We began our day with a quick stop at the guano platform between Swakopmund and Sossusvlei. The guano platform is about 200m offshore and is 1.7 hectares in area. It was originally built in 1932 and Namibia is the only place that uses the platforms. Hundreds of thousands of cormorants (mostly Cape cormorants (Phalacrocorax capensis)) nest and roost on the platform. Every 12 to 18 months, 2500 tons of bird guano are removed and used for fertilizer. We were looking for crowned (Microcarbo coronatus) and bank cormorants (Phalacrocorax neglectus) (both endemic to southern Africa) to add to the list. We missed the bank cormorant (whose numbers have plummeted over the past twenty years) but we found three or four crowned cormorants tucked among the thousands of Capes.

We continued on to the lagoon around low tide where hundreds of shorebirds were feeding on the mudflats. There were hundreds of bar-tailed godwits (Limosa lapponica) pouring over the mudflats along with a few little stints (Calidris minuta) and curlew sandpipers (Calidris ferruginea). A big grey heron (Ardea cinerea) flew in with a massive eel still wriggling in his beak. He fought with his slippery catch for a couple minutes before swallowing whole and squirming. We moved down a little further where we found all the tourists from the recently docked cruise ship twitching a mixed flock of flamingos. They seemed unimpressed with the sanderlings (Calidris alba) and ruddy turnstones (Arenaria interpres) that were running around. Dayne began scoping one of the many sand banks in the bay and pulled out a single parasitic jaeger (Stercorarius parasiticus) preening. This usually pelagic bird seemed unconcerned about being a little far from home. Our last lagoon stop produced a gorgeous Terek sandpiper (Xenus cinereus). The Terek sandpiper is the only species in its genus and tends to be an uncommon bird on the southern African coast with most birds stopping further north in Africa. 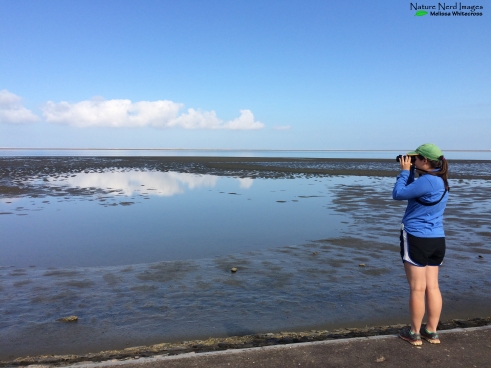 Me enjoying the Walvis Bay lagoon 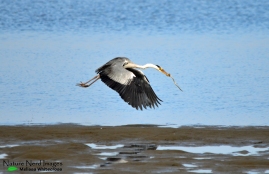 Grey heron flying away with his catch 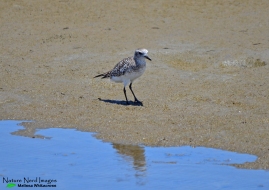 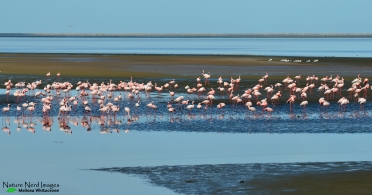 The flamingoes being twitched 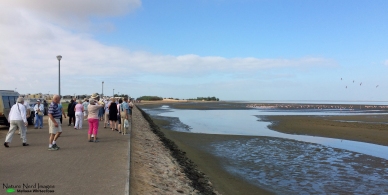 The twitchers of the flamingoes

We arrived at the lagoons at about ten o’clock and began sifting through the thousands of birds spread across the ponds. There were Damara (Sternula balaenarum), common (Sterna hirundo), sandwich (Thalasseus sandvicensis), Caspian (Hydroprogne caspia), swift (Thalasseus bergii) and Arctic terns (Sterna paradisaea) circling above us and sitting on every single sand bank. Squadrons of great white pelicans (Pelecanus onocrotalus) floated lazily on the water. Flamboyances of flamingos thousands strong waded in the shallows, filtering out small crustaceans with their beaks. Tiny chestnut-banded plovers (Charadrius pallidus) and white-fronted plovers (C. marginatus) zipped across the drier salts pans, snapping up tiny flies. Ruddy turnstones piled onto rocks with little stints and curlew sandpipers. 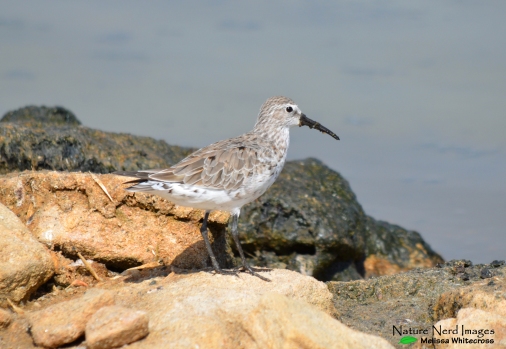 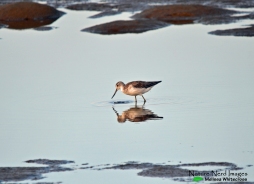 Common greenshank walking across the mud 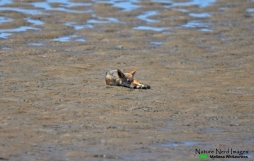 Jackal cooling down in the mud 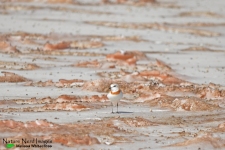 Lesser flamingo in the bay 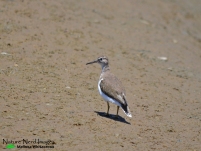 A little woodie on the mud 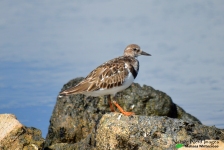 Ruddy turnstone perching on a stone

After picking up all the common shorebirds, we started to pick up some of the less common species. We found a really interesting gull sitting on the edge of a pan. It looked exactly like a Hartlaub’s gull (Chroicocephalus hartlaubii) except its very pale eye which is typical of grey-headed gull (C. cirrocephalus). Our conclusion is that this bird was a hybrid of the two species. We scanned in all the normal common redshank (Tringa totanus) spots but they were not home (next trip maybe) but we did find the resident red-necked phalaropes (Phalaropus lobatus) (all nine of them) spinning in little circles as usual. We reached the pumping station where salt water is pulled into the evaporation ponds and where European oystercatcher (Haematopus ostralegus) is known to lurk. We walked down the long path spotting 60 or 70 African black oystercatchers (H. moquini) and a few flocks of Eurasian curlews (Numenius arquata). Just when we were beginning to give up hope, a flock of oystercatchers flushed up with the European at the head of the flock. The others were chasing it and nipping at its feathers. We got fantastic views of the bird, picking up not only the color differences but also the size differences and the difference between calls. 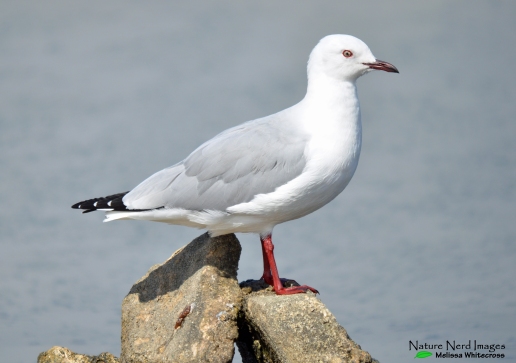 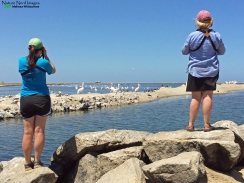 Mom and I birding at the oystercatcher spot 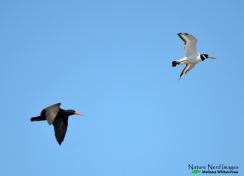 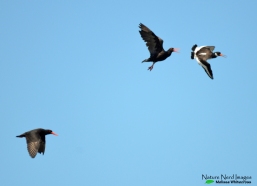 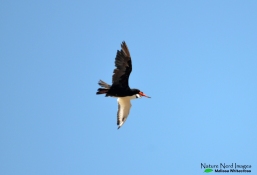 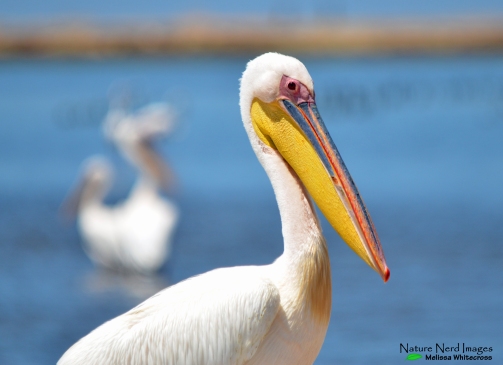 To celebrate our success, we went and had a great seafood lunch on the shore before popping in to a little park to find two Orange River white-eyes (Zosterops pallidus) gleaning insects in a tree. After that it was off to the Walvis Bay Sewage Works to try for a few more species. The sewage works were ridiculously hard to get into with every road ending in a dead end or no water but Dayne prevailed and we found a little lush oasis in the middle of white sand dunes. There were more flamingoes, of course, but also a single African swamphen (Porphyrio madagascariensis), an African reed warbler (Acrocephalus baeticatus), and some common moorhens (Gallinula chloropus). It is amazing how all the freshwater birds had found the freshwater for miles.

The sewage works at Walvis 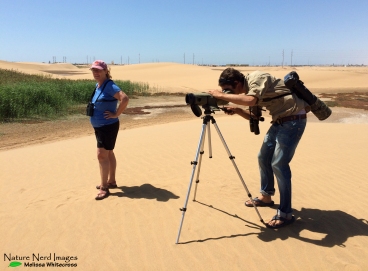 Checking out what was around 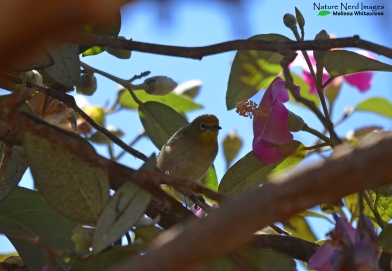 Orange river white-eye checking us out

After our sewage work foray, we headed to try to find a red knot (Calidris canutus) along the beach. In Namibia, these birds tend to feed in the wrack (seaweed) line or on the rocks on beaches. They have been getting increasingly scarce probably due to the fact that their populations have crashed in recent years leading them to be listed as Near Threatened. And scarce they were, we could not pick up a single red knot. This inevitably led to endless knot jokes such as “the knot that was not.” We drowned our sorrows with one more wader pond where we picked up our only Cape shoveler (Anas smithii) for the trip and a handsome Caspian tern. 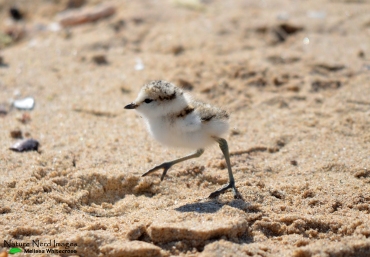 Baby plover chick on the beach 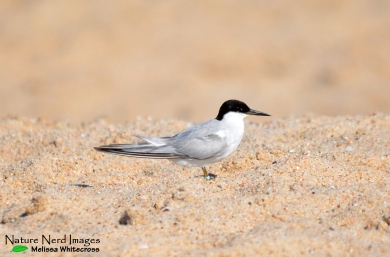 We ended our day with more seafood at a gorgeous remodeled tug boat turned restaurant, watching the sun going down. We picked up around 63 species including four lifers each and certainly improved our shorebird identification. Our target tomorrow is the Herero chat (Namibornis herero), one of the more elusive near-endemics, at Spitzkoppe. We cannot wait to see the Matterhorn of Namibia. 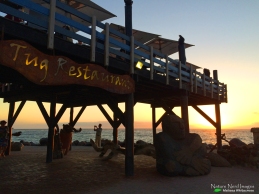 And the Tug restaurant