Just got back from an amazing trip to Zululand with the BirdLife South Africa Southern Banded Snake Eagle survey team with team leader Melissa and eagle-eyed guide Junior Gabela! While our primary goal was to assess the presence of Southern Banded Snake-eagles (particularly outside of protected areas), we atlassed the whole way too! We traveled from Amatikulu in the south to False Bay in the north and were lucky enough to gain access deep in the plantation matrix as well as onto several farms due to the generosity of Sappi, Mondi, and some of the local farmers.

We did a significant amount of atlassing for the Southern African Bird Atlas Project 2 (SABAP2). Atlassing, in a nutshell, involves documenting the birds you see or hear in a pentad (an approximately 9km x 9km square). Your goal for a full protocol card (FP) is always to cover all the habitats in these squares (although this can prove tricky with private land etc.) for at least two hours. Having access to all the plantations as well as several farmers really helped this process so we really cannot thank all the land owners enough for giving us access for our surveys (and our atlassing as it happens).

Over the twelve days, we managed 22 pentads including eight new pentads for 2018. Three had not been atlassed in the last three years! Moving from north to south here are some highlights from our time: 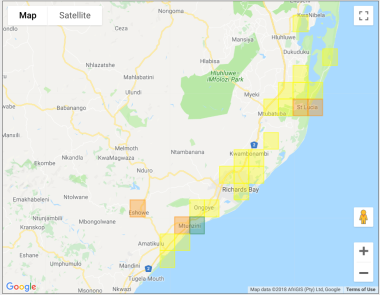 2755_3220 (False Bay NR): This is a fairly well atlassed pentad (56 FP cards). We spotted a gorgeous male Neergard’s Sunbird (a lifer for Melissa and me) and recorded many other specials such as Eastern Nicator, Pink-backed Pelican and Rufous-winged Cisticola. Other good birds included the third pentad record for Brown-throated Martin and the fourth record for Golden-breasted Bunting. A total of 63 species. 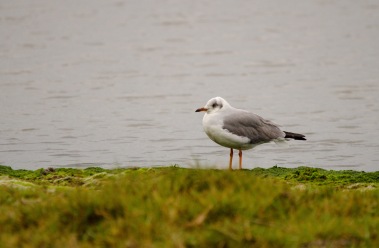 2810_3220 (Western Shores and plantations): This pentad was also fairly well atlassed (43 FP cards). We managed to add Kittlitz’s Plover to the list and the second records for Broad-billed Roller, Pink-throated Twinspot, and Crested Francolin. Other nice sightings included a flock of Senegal Lapwings, Black-throated Wattle-eye, and Grey Waxbills as well as my first Red-backed Shrike for the season. A total of 58 species.

2815_3215 (plantations north of Mtubatuba): This pentad was certainly a hidden gem. It was last atlassed in 2014 and only had seven previous cards. While on the outside it looked unpromising with large tracts of plantation, it turned out to hold some phenomenal species. We added 23 new species to the pentad list including Temminck’s Courser, Grey Waxbill, Narina Trogon, Green Twinspot, Willow Warbler, Yellow-throated Petronia, and Red-billed Oxpecker. We also had nine second time records. A total of 68 species.

2815_3220 (Western Shores and plantations): This is another fairly well atlassed pentad (73 cards). We found a Red-collared Widowbird, the second record. Other nice species included Narina Trogon, African Pygmy Kingfisher, and Amethyst Sunbird. A total of 55 species.

2815_3225 (Eastern Shores): This pentad had 63 FP cards. We got the first record of Bateleur and the second records of Red-backed Mannikin and Greater Honeyguide. We also had multiple sightings of Southern Banded Snake Eagle, a gorgeous Martial Eagle, all three honeyguide species, and African Goshawk! A total of 63 species. 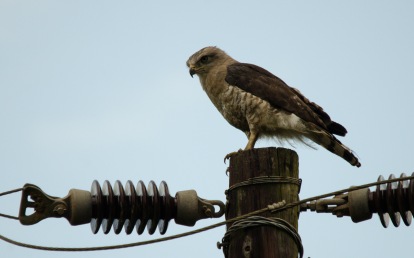 The subject of our surveys, Southern Banded Snake-eagle

2820_3210 (Mtubatuba): This pentad has only been done twelve times and this was the first for 2018. We added a few new species to the list including Eastern Nicator, African Firefinch, and Livingstone’s Turaco. Nice species also included Grey Sunbird and Crested Guineafowl. A total of 34 species.

2820_3215 (east of Mtubatuba): This was another first FP for 2018 and was the 17th FP for the pentad. We spent A LOT of time in the plantations for this one. We got eight new species and ten second records. The best species was unquestionably a juvenile Ayre’s Hawk-eagle but other nice species including African Fish-eagle, Little Sparrowhawk, Eastern Nicator, and Green Twinspot. A total of 71 species. 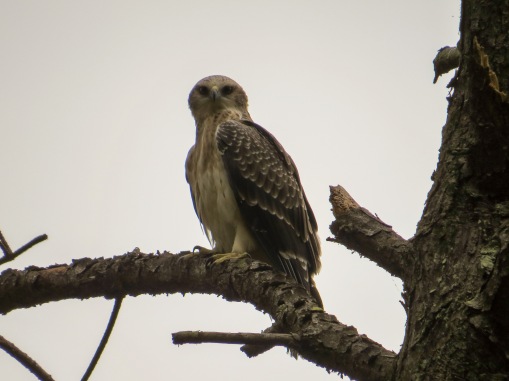 The highlight, a juvenile Ayre’s Hawk-eagle 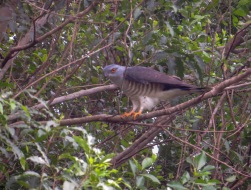 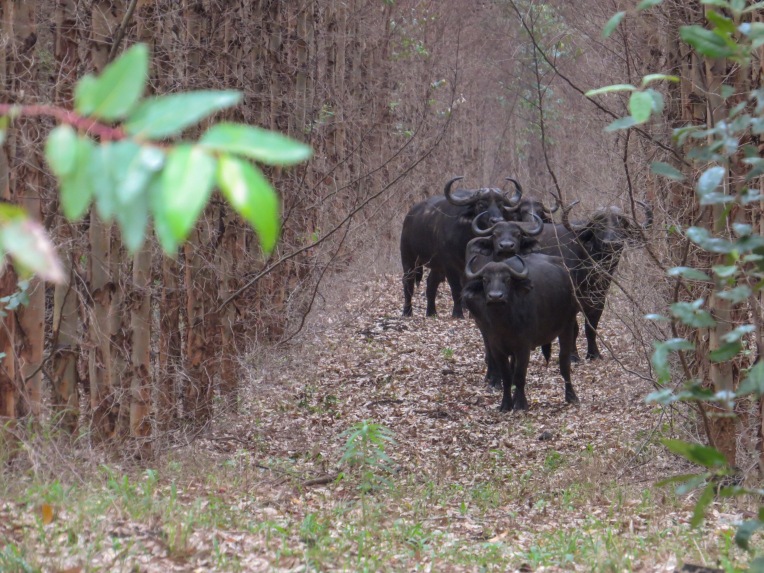 2820_3220 (St Lucia village): This is a really well atlassed pentad. Some of our highlights include the second FP record of Wahlberg’s Eagle as well as some nice migrants like Common Buzzard and European Bee-eater. A total of 63 species.

2820_3225 (St Lucia estuary): Another well atlassed pentad. Fairly standard mix of terns and waders at the estuary mouth and a gorgeous Broad-billed Roller. A total of 70 species.

2830_3210 (east of Kwambonambi): This pentad had only been done ten times and was last done in 2015. We added 17 new species to the FP list including Yellow-throated Petronia, Black-throated Wattle-eye, and African Pygmy Kingfisher. A nice dam also yield Hottentot Teal, Little Rush Warbler, and Southern Brown-throated Weaver. A total of 77 species.

2835_3200 (west of Kwambonambi): This one previously had 17 FP cards. We were lucky enough to spend time with a very knowledgeable farmer who showed us around his farm and the surrounding area. We were lucky enough to log ten new species for card including Willow Warbler, and Plain-backed Pipit. We also found a small dam which produced African Spoonbill and Yellow-billed Stork. A total of 76 species.

2835_3205 (Kwambonambi and Amangwe Forest): This one was tough going in the heat but we worked through over three hours in the pentad. The only new bird was in the form of a single Southern Banded Snake-eagle calling in a forest patch. A total of 34 species.

2840_3155 (north of Empangeni and part of Enseleni NR): This was one of my favorite pentads! One of the farmers took us on boat trip along the river which produced some great firsts for the pentad like Half-collared Kingfisher, Caspian Tern, and Black-crowned Night-heron. We also got two sightings of African Finfoot! Also recorded Palm-nut Vulture, Southern Banded Snake-eagle, and a Crowned Eagle nest. A total of 88 species.

A Hadeda Ibis on its nest over the river

2840_3200 (east of Richard’s Bay and part of Enseleni NR): This included the other half of our boat trip. We got Half-collared Kingfisher and Southern Brown-throated Weaver (both pentad firsts) along the river and African Openbill (second record). Overall, we recorded seven firsts for the pentad. A total of 82 species.

2840_3205 (north half of Mzingazi Lake): We did this on a super windy day! Despite fighting the wind, we got some fabulous birds including a glorious male Green Twinspot, a calling Livingstone’s Turaco, and a flock of four Fulvous Whistling Ducks (all new for the pentad). Overall eight of the 42 species, we recorded were pentad firsts! Not a bad ratio!

2845_3200 (Richard’s Bay): There is no question what the bird of this pentad was! The fabulous juvenile Lesser Frigatebird who put on quite the show! Besides that a pair of African Pygmy Geese at the dam were nice to see as were displaying Rufous-winged Cisticola. A total of 53 species.

The Lesser Frigatebird doing what frigates do best!

2850_3145 (north of Port Durnford): This pentad had eleven FPs and had last been done in 2014. It was one of the most transformed pentads that we atlassed with a combination of plantation and grazing lands. We added eight new species to the FP list including Klaas’s Cuckoo, Violet-backed Starling and Black-chested Snake-eagle. A total of 44 species.

2850_3150 (north of Port Durnford): Only twelve FPs had been done for this particular pentad and none in 2018. It was very similar in habitats to the previous pentad with majority plantations. We still managed some solid species including nesting African Pygmy Kingfishers, calling Green Twinspots, a single Red-throated Wryneck, and a Jackal Buzzard perched by the train line. A total of 55 species.

2855_3140 (south of Mtunzini): A well atlassed pentad which includes Twinstreams Camp where we stayed. This was the first FP of the year Nothing new for this pentad but we did get the second FP records for Terrestrial Brownbul and Great Egret. We also had a calling African Wood Owl, a confiding Lemon Dove, and a Southern Banded Snake-eagle. A total of 50 species.

2855_3145 (Umlalazi NR and Port Durnford): This is unsuprisingly a well-covered pentad as it included Umlalazi NR of Mangrove Kingfisher fame. We found the regulars including Rufous-winged Cisticola and Woolly-necked Stork. A few Pink-backed Pelicans soared over which were nice to see as well. A total of 70 species.

2900_3140 (south of Mtunzini): This pentad had only been done ten times despite its proximity to Mtunzini. It also had not been done since 2016. Highlight for us was a single Striped Pipit deep in the plantations. We also had a calling Scaly-throated Honeyguide, African Firefinch, and African Harrier-Hawk. A total of 58 species.

2905_3135 (Amatikulu NR): This was our last pentad on the morning we drove back to Joburg. The wind was howling which did not help our birding but the forest patches were relatively sheltered. Cardinal Woodpecker and Brown Snake-eagle were both good birds for the pentad. We also had several calling Narina Trogons and a Western Osprey fly over! A total of 51 species.

Overall, it was a fabulous trip and contributing to the coverage of SABAP2 was the icing on the cake!